We started the week with clay modelling. We were handed a ball of clay and we had to shape it into an amulet and then after, another ball of clay to transform into a sarcophagus head. 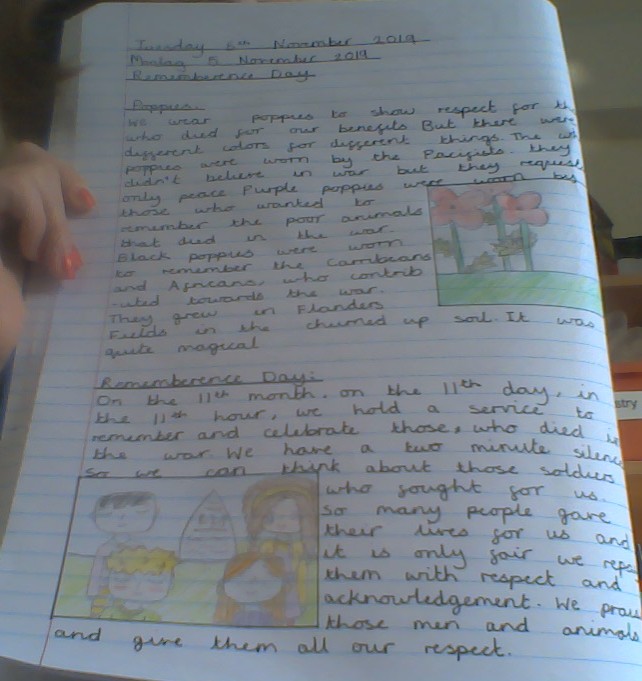 On Tuesday we made fact files based on WW1. They consisted of information leading up to Remembrance Sunday and other aspects of remembrance. Most of us wrote about the poppies and the colors and their meanings, others focused on why we actually had remembrance day. I wrote a bit of both.

We were allowed to add pictures (drawings or ‘off-the-internet-pictures’) and choose what we wrote about. I found the poppies rather interesting. Did you know the black poppies represented the Africans and Carribeans who contributed towards the war, the white poppies were for the Pacifists, who didn’t believe in war but only wanted peace, purple poppies were a meaning of respect towards those poor animals who had to, unfortunately, died due to bombs and toxins and lastly, the most common poppies to wear! The red poppies! The red ones were to symbolise respect and remembrance to all and everything that died. It’s really important we remember those soldiers who fought for our benefits. We thank them too!

In English we wrote a poem all about world war 2. We also watched a video about two boys reading their grandpa's letter from world war 2 they then got caught and then had to put the letter back - it was a very sad film.Some people will be reading theirs at the rememberance service - hope you are all coming!